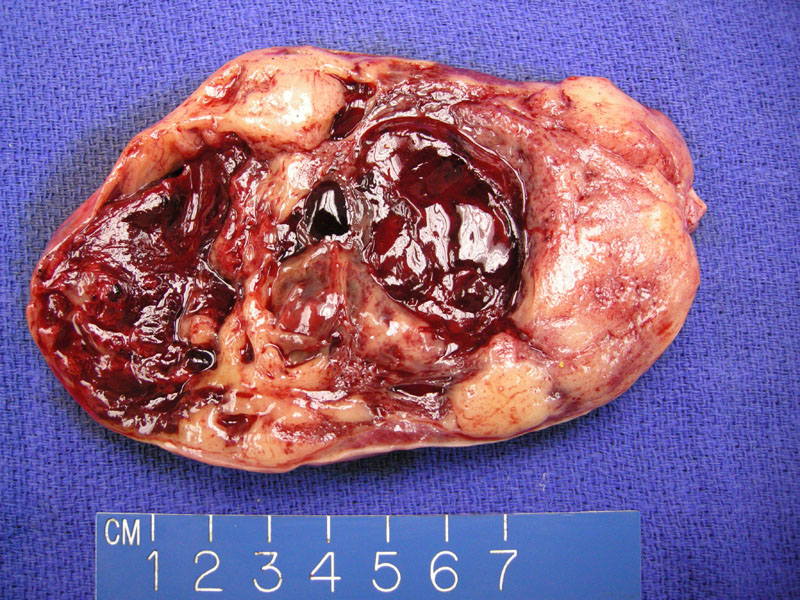 This granulosa cell tumor demonstrates broad anastamosing cords of tumor cells, separated by a fibrous stroma. One can almost see a superimposed microfollicular pattern, in which the sheets are punctuated by formation of small lumens (Call-Exner bodies).

Note again the presence of Call-Exner bodies that impart a microfollicular pattern. Although an extremely useful diagnostic feature, they are not present in all granulosa cell tumors. The nuclei of granulosa cells are usually round, ovoid and grooved. Nucleoli are moderately prominent.

Note that there is often a blending of different architectural patterns. This image demonstrates a microfollicular nested pattern (upper left) adjacent to a diffuse solid pattern.

Granulosa cells exhibit several architectural patterns. This particular tumor demonstrates a diffuse or solid growth pattern, which is the most common one. The cytoplasm of granulosa cells is usually scanty, however, it may be abundant and eosinophilic, especially if luteinized

An area with focal microfollicular pattern is seen.

Numerous longitudinal nuclear grooves are a feature of this tumor. A few are noted by arrows but further inspection reveals even more.

This granulosa cell tumors metastatic to the bladder. Two-thirds of patients with stage III tumors (presence of intra-abdominal spread) will die of the tumor (Fletcher).

Approximately 1% of granulosa cell tumors can be luteinized. The nuclei are centrally placed surrounded by abundant eosinophilic cytoplasm, resembling luteinized granulosa cells of the corpus luteum. Luteinized GCTs can be found in pregnancy, in patients with androgenic tumors and also as idiopathic findings (Nucci). In one study at least, lutenization was a risk factor for recurrence, but this feature has not been well-studied (Nosov).

Inhibin is more specific for ovarian sex cord-stromal tumors and calretinin is more sensitive. Both are good markers for granulosa cell tumors.

Calretinin is another good marker for granulosa cell tumors.

Granulosa cell tumors are one of the most common tumors within the sex cord-stromal tumor category. These tumors are also the most common ovarian tumor associated with estrogenic manifestations. 75% of GCTs are estrogenic, but a minority may be androgenic. There are two forms of granulosa cell tumors: adult and juvenile. The former mainly occurs in postmenopausal women and the latter in children and adolescents.

Inhibin is a splendid marker for granulosa cell tumors, although it is not specific and other ovarian tumors may demonstrate positivity. However, once the diagnosis of granulosa cell tumor has been confirmed, inhibin can be used to monitor for recurrence and response to treatment. Calretinin is also another good IHC selection to support the diagnosis.

Grossly, the tumors can range from small nodule to 30 cm in diameter. Most have a cystic and solid component. Microscopically, the tumor cells resemble normal granulosa cells. The nuclei often have a longitudinal groove, so-called "coffee-bean" nuclei. A microfollicular pattern is the most characteristic pattern in which small follicles called Call-Exner bodies are formed. Note that Call-Exner bodies are also found in normal developing ovarian follicles. Other patterns include trabecular, microfollicular, macrofollicular and insular.

Most commonly occurs in peri- or post-menopausal women (average age of 50-55). May present with abdominal pain and pelvic mass. Estrogen production by the tumor stimulates endometrial proliferation. Therefore, 1/3 to 2/3 of patients experience abnormal uterine bleeding such as postmenopausal bleeding. Endometrial biopsies will reveal endometrial hyperplasia in 30-40% of patients and endometrial adenocarcinoma in 5-10% of patients.

If this tumor occurs in a prepubertal patient (juvenile granulosa cell tumor), excessive estrogen will present as precocious puberty. These tumors are generally unilateral and bilateral tumors are very uncommon.

As these tumors of considered of low malignant potential in the reproductive years, they can be managed with unilateral salpingo-oophorectomy. In the peri- or post-menopausal woman, these tumors can be managed with total hysterectomy and bilateral salpingo-oophorectomy, with staging and debulking in patients with obvious advanced disease. Patients with early disease do not need adjunctive chemotherapy.

Patients with advanced, recurrent, or metastatic disease should be treated with chemotherapy- BEP (bleomycin, etoposide, and cisplatin) is the preferred regimen. Because of the propensity for late recurrences, prolonged surveillance with serial serum tumor markers such as estradiol and inhibin is reasonable in these patients.

In general, of low malignant potential. Most do not recur or metastasize, although this is certainly possible. Recurrence is approximately 20-30% overall. Tumor stage is the most important prognostic factor. 5, 10 and 20 year survival rates are 77-90%, 67-90% and 41-62% respectively 1

These tumors have a tendency for late recurrences with an average span of 5-30 years from initial diagnosis to recurrence.

♥ Have a tendency toward late recurrences.

♥ Inhibin is a good marker not only for IHC studies, but to monitor treatment and recurrence.